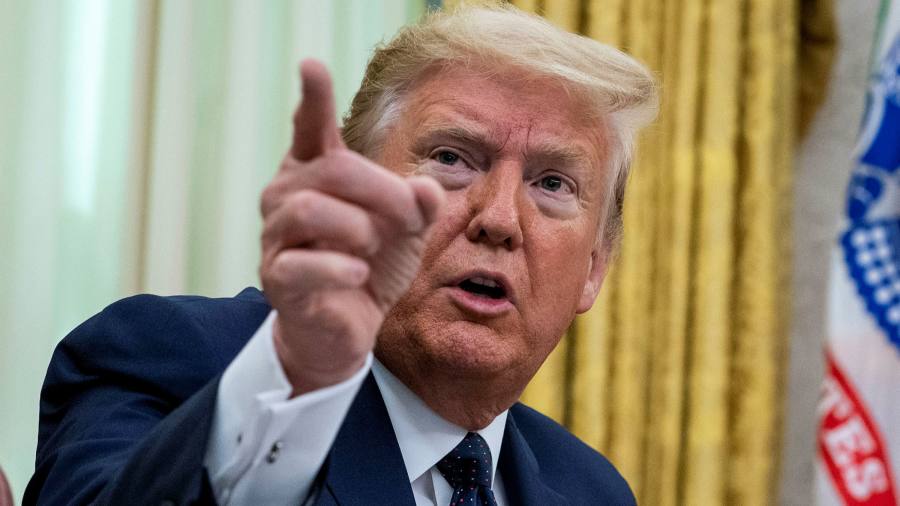 For a powerful leader, there are few adjectives more deadening than “outgoing”. Not in the sense of being extrovert or party-loving, but meaning “soon to depart”, heading for the door — over, but not yet out.

Donald Trump, outgoing US president, is feeling the chill already. Defeated or departing presidents have to endure an extended spell in purgatory — nearly 80 days in Mr Trump’s case — from election day to the inauguration of their successors. That is a long time to carry the label of “outgoing”, or, worse, “lame duck” president, which partly explains his desire to use the tools of government to nail himself to the Oval Office desk.

Despite his and his supporters’ best efforts to challenge the outcome, though, Mr Trump’s authority is already ebbing away to Joe Biden. In the meantime, he is providing an object lesson in graceless exits that all leaders, outgoing or not, should study.

Business leaders can influence when they depart more often than their political counterparts. Even they agonise over the timing and framing of their exit. Announce a departure date too soon and you face a long limp to the finish line while your successor looks on hungrily. Once the countdown has begun, the board sometimes puts lamed leaders out of their misery sooner than planned.

The desire to delay the inevitable is understandable. The path away from power is peppered with tiny humiliations. The joke about ex-leaders settling into the back seat of a parked car and expecting it to move away immediately contains a grain of truth. The day Tony Blair stepped down as UK prime minister in 2007, he arrived in his constituency by train and reportedly headed instinctively towards a waiting BMW, before being told he would have to squeeze into a far humbler vehicle.

The market for influence — a little like the stock market over the past week — adjusts swiftly to new realities.

As this newspaper’s outgoing Milan correspondent in the 1990s, I held a drinks reception to thank my contacts and introduce my replacement. As soon as I had made my farewell remarks, my guests swarmed over to my incoming colleague, marooning me at the bar with a rapidly warming glass of prosecco.

On a far higher level, at an event at the Chicago Federal Reserve a few years ago, central bankers were brutally ranked by proximity to the levers of monetary power. Current officials were placed in the middle; everyone else off to the side. To rub it in, senior ex-bankers — even Ben Bernanke, once the all-powerful Fed chairman — were handed name tags giving their position as “Former Policymaker”.

While advice abounds in the “how to lead” section of the business bookshop about how chief executives should handle their first 100 days, the “how to leave” shelves are largely bare, apart from the obvious (but still frequently ignored) imperative to make a succession plan.

One tip, more relevant for disgruntled presidents than disillusioned chief executives, is to resist the temptation to sabotage or undermine your successor. When the courts finally adjudicated the 2000 presidential election in George W Bush’s favour, over Al Gore, the outgoing Clinton White House staff were accused of pranks and petty vandalism. Most notorious were attempts to prise the “W” from West Wing keyboards. An official probe looked into allegations of desks with drawers glued shut, stolen presidential seals, missing doorknobs, prank voicemail messages, and a jammed filing cabinet that, once opened, contained Gore campaign stickers.

A more widely applicable suggestion is to steer between the lure of slacking off, and the pull of a big swansong deal. Either can backfire. Once the transition has started, opportunities to secure a reputation different from the one you have already built are scarce. The risk you could wreck any credibility you have left is still live, however. The soundest approach is to do the job you are paid to do to the best of your ability until the moment you step away from your desk. You may have no choice. George W Bush, who oversaw a civilised handover to Barack Obama in 2009, had to fight the raging financial crisis until the day he left.

Or you could abandon grace, poise and dignity and wait to be pulled screaming from the corner office. But to paraphrase Mr Biden’s comment on Mr Trump’s reluctance to concede, “How can I say this tactfully? It will not help [your] legacy.”