Cosmologists seek to infer the history of the Universe by using observations of today’s cosmos to glean information about the exotic physics at play during its earliest moments. The epoch of Big Bang nucleosynthesis (BBN) represents a crucial frontier in this history. BBN is the process that produced the nuclei of the lightest elements, and started about one second after the Big Bang — the earliest time at which the known laws of physics left ‘fossils’ that can be probed experimentally1. Writing in Nature, Mossa et al.2 report measurements of nuclear reactions that sharpen our understanding of BBN, thereby allowing us to precisely measure the amount of ‘ordinary’ matter in the cosmos and potentially deepening our knowledge of the early Universe.

The Universe is expanding. We see this today in the systematic recession of galaxies, which spread to become ever more dilute with time. The present Universe is also cold, filled with thermal radiation known as the cosmic microwave background (CMB), which has a temperature of just under 3 kelvin. But the further back in time you go, the denser and hotter the Universe becomes, with cosmic particles having ever-higher energies and undergoing increasingly violent collisions. During the cosmic ‘atomic age’, when the Universe was 400,000 years old, it was so hot that atoms were unable to exist as bound objects, and ionized to form a plasma of free electrons and nuclei. And around one second after the Big Bang, the temperature was so high that atomic nuclei were unbound into their constituent neutrons and protons. This cosmic ‘nuclear age’ is the time of BBN. 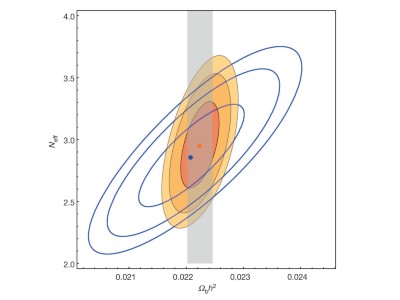 When BBN began, the Universe was a hot soup of particles in which neutrons and protons were swarmed by photons and neutrinos1. The neutrons and protons combined as the Universe expanded and cooled, first forming a heavy isotope of hydrogen known as deuterium, whose nuclei consist of one proton and one neutron. The deuterium was then transformed by a series of reactions into helium‑3 nuclei, and ultimately into helium‑4 nuclei. After about three minutes, the Universe consisted of about 75% ordinary hydrogen nuclei and 25% helium‑4, along with traces of deuterium, helium‑3 and lithium‑7. The Big Bang was thus the origin of the two most abundant elements in the Universe (hydrogen and helium), and made only light elements. Elements heavier than lithium‑7 arose much later, during the deaths of the first stars.

To test theoretical models of BBN, cosmologists and astronomers observe the light elements in the Universe and infer their primordial abundances. Such observations3 have confirmed that the primordial abundance of helium-4 was 25%. Measurements of deuterium4 in the distant Universe offer further crucial information, because the ratio of the abundance of deuterium to that of hydrogen depends sensitively on the cosmic density of ‘baryonic’ matter — ordinary matter that consists of neutrons and protons, essentially anything in the periodic table. Importantly, the baryon density inferred from deuterium measurements agrees with the value obtained independently from measurements5 of the CMB.

In the race to test BBN models ever more precisely, measurements of the primordial abundance of deuterium have achieved 1% precision4, which is much better than the uncertainties in predictions of this quantity that have been made using BBN theory6. The uncertainties in the predictions largely derive from the precision with which the cross-sections (essentially the rates) of key BBN nuclear reactions have been measured experimentally, most notably the rate of the reaction in which a deuterium nucleus and a proton combine to yield a helium‑3 nucleus and a photon (Fig. 1).

The previously reported data for this reaction rate were sparse at the particle energies relevant for BBN, and theoretical calculations7 have shown that estimates of the rate based on these data might have been systematically low. If so, then BBN predictions based on existing data would have incorrectly calculated the deuterium abundance. Any difference between the deuterium abundance predicted by BBN models and the value obtained from observations might indicate that unknown physical laws were at play in the early Universe. Progress in cosmology therefore requires a definitive experiment to measure the rate of the key nuclear reaction. Mossa and co-workers’ study addresses this lacuna.

A formidable challenge when making precision measurements of the rate of this nuclear reaction is that irradiation of the laboratory by cosmic rays produces background signals that can drown out the results. Mossa et al. have eliminated this background noise by performing their experiment in the Gran Sasso National Laboratory, which is located more than one kilometre beneath the Italian Apennine mountains. They used a particle accelerator to bombard a deuterium target with a beam of protons, thus carrying out the helium‑3-producing reaction at particle energies associated with BBN, and at surrounding energy values.

This great care was rewarded: the uncertainties in the measurements of the reaction rate were reduced from 9% precision to less than 3%. This allowed the authors to refine theoretical BBN predictions to a precision much closer to that achieved from deuterium observations. Moreover, the measured reaction rate is higher than the value obtained from the previous sparse experimental data at the relevant particle energies, but notably falls below the value that was predicted from the theoretical calculations7. This relaxes the tension between the results from the deuterium observations and BBN predictions based on those theoretical calculations, relieving the need to propose the existence of unknown physics to account for the discrepancy.

Mossa and colleagues’ findings will have a lasting impact on the field of BBN, and indeed all of cosmology. Their data allow an even sharper determination of the baryonic content of the Universe, which they report to be 4% of the total density today. This now agrees at the 1% level with the value derived independently from CMB measurements6. This agreement represents a triumph for the basic theoretical framework of cosmology: by using known laws of physics in combination with observations of the Universe, one can ‘run the movie of the cosmos backwards’ to when the Universe was just one second old, and show that it started with a hot Big Bang.

In turn, this spectacular success will stimulate the study of cosmic epochs even earlier than that of BBN, for which the underlying physics is not well known. At times less than one second after the Big Bang, the cosmos attained high-energy regimes that are in–accessible using particle accelerators. The Universe could thus become the ‘poor person’s accelerator’: astronomical observations will allow us to glean information about the exotic physics at play during its earliest moments.

Moreover, because BBN models tell us that ordinary matter represents 4% of the Universe today, we can infer that the remaining 96% consists of invisible dark matter and dark energy, the identities of which are unknown. If these dark components influenced the abundances of light elements produced during BBN, they will also need to be accounted for correctly in BBN models to ensure that predictions from those models agree with observations. Studies of BBN can therefore help to inform theories of the dark side of the Universe.

Looking forward, BBN promises to remain an exciting research topic throughout the 2020s. The agreement between the predicted and observed primordial deuterium abundance will be even more sharply tested. Future measurements8 of the CMB will provide even-more-precise quantifications of baryon density, of the abundances of helium and cosmic particles, and of the energy content of the Universe at early times. The resulting findings will enable new tests of BBN, or will achieve their maximum potential when used in concert with BBN theory, and might also lead to a better understanding of the puzzling cosmic abundance of lithium9.

An essential round-up of science news, opinion and analysis, delivered to your inbox every weekday.